Earlier the typical Punjabi style food was more popular in Muktsar which has now been replaced by the Western style food. Owing to the popularity of Western food, a majority of locals nowadays prefer Western cuisines over Punjabi cuisines. However, there are some people who still remain entrenched to their Punjabi food culture. Women generally perform the daily cooking ritual in all households of Muktsar and LPG gas stoves are widely used for cooking purpose. 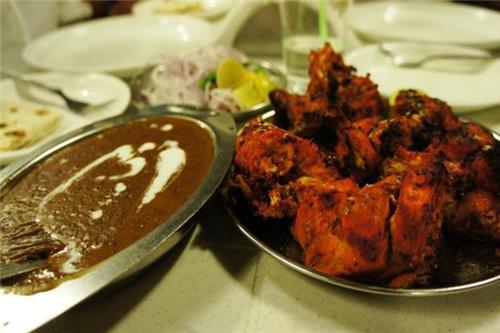 The staple food of Muktsar is roti or paratha which is consumed with spicy vegetarian curry recipes prepared using legumes or fresh vegetables. The main vegetables that are normally consumed on a daily basis are eggplant, potato, carrot, okra and cauliflower. Some of the well-liked legumes that are regularly cooked in a majority of households in Muktsar are chickpea, beans, lentil, black gram, peas and pigeon pea. A variety of dairy products and rice also form a major part of the basic food of Muktsar. Paneer is relished in almost every household of the city and is generally consumed in the form of rich curries along with peas or some other vegetables. Muktsar people love to enjoy food in company with dairy products like yogurt and sometimes also along with papad, chutneys, pickles, tomatoes, onions and cucumbers.


The Famous Cuisines of Muktsar

Among the non-vegetarian foods fish, eggs and meat are the most preferred ones. The Amritsari Fish, Tandoori Chicken, Butter Chicken, Jeera Murg, Chicken Biryani, Egg Curry and Egg Bhaji are some common non-vegetarian cuisines that are savored by the Muktsar residents. Among the vegetarian preparations the Chana Masala, Amritsari Aloo, Makki di Roti, Navratan Korma, Dal Makhani and Dahi Bhalle are the most popular ones. The city brags of bounteous local restaurants, fast food joints and sweet shops spread over in the various localities of Muktsar in Punjab.

Muktsar abounds with numerous restaurants that offer local authentic Punjabi cuisines, South Indian as well as Chinese cuisines. Besides, there are a number of pizza, fast food and ice-cream joints as well. Some licensed as well as unlicensed vendors sell inexpensive fast food like golgappa, burgers, alu ki tikki, chai, pakora, dahi bhalla, kulcha, samosa and chowmein on the streets of Muktsar. Below given are the whereabouts of some prominent eateries located in the Muktsar city of Punjab:

Sooji ka Halwa, Gajar ka Halwa, Pinni, Gulab Jamun, Motichur ka Ladoo, Imarti, Kalakand, Soan Papdi, Jalebi and Kaju Barfi are some of the popular sweet dishes that are relished by the locals of Muktsar. Following are the contact details of some noteworthy sweet shops in Muktsar from where you can buy your favorite Punjabi sweets to gift someone or to relish them on festive occasions:

Thus, we see that Muktsar abounds with a large number of eateries to satiate the taste buds of all and sundry.

Comments / Discussion Board - Food in Muktsar